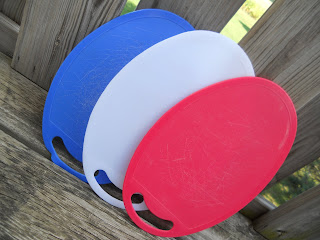 Blue: Fruits & Veggies
White: Cooked Meat
Red: Raw Meat
Why do I do this? You see, when we cut food up, we create cuts on the board that are perfect for a plethora of bacteria to hide. It's hard to clean these groves out well, which can lead to cross contamination. And let's be honest. None of us would rub raw chicken on our veggies before we eat them (at least I hope you wouldn't!). Because I don't want meat bacteria on my veggies that won't be cooked, I choose to keep those foods on separate boards. Make sense, doesn't it?
After cutting my raw meat, I don't just throw the board in the dishwasher either. In a pan I bring water up to a boil, and dump that over the board and let it soak in for a bit. This helps to kill some of the bacteria in the hard to reach places. After that I either hand wash the boards or stick them in the dishwasher. While that sounds a little tedious in the moment, I remind myself that the little bit of extra time now is better then days of feeling sick from food poisoning.
Now it's your turn:
What are your cutting board habits? Have you ever lived with a roommate who had one set of rules, but you chose not to follow them why they weren't around?
Posted by Counselor Musings at 5:00 AM

Counselor Musings
I'm a Clinical Mental Health & Addictions Counselor interested in helping people increase health & wellness in their lives so they can reach their full potential and be flourishing in life. At the same time, I'm on my own journey of health and wellness.