On April 26th, a car accident happened on a highway in Indiana. 4 students and one staff member of a University were killed, while 3 staff members and one student survived. 5 weeks later, a case of mistaken identities was discovered between the student who survived, and one of the students who died. 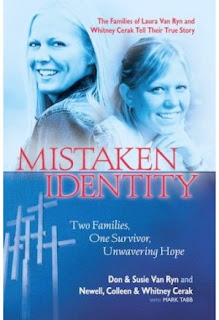 After 5 weeks, doctors realized that it was Whitney, and not Laura, who was at the hospital, and Whitney's parents had buried "Whitney", who was actually Laura. This story follows the journey of two families, from the night of April 26, 2006, through the weeks and months following. You will rejoice and mourn with the University, and especially the two families of Whitney and Laura, as you read the book. It's a book of inspiration and hope amidst grief, confusion, and suffering. These two families have been on the Today Show and The Oprah show, and I find their story inspirational. I highly encourage you to read the book and follow along on the journey of hope these 2 families share. When I first read the book in 2008, I was awestruck by the reactions of the families, and how the campus chose to deal with the events of the accident. Check it out- you certainly won't regret it!
If you're interested in some background on the story, here are a few links:
Five from Taylor University killed when semi strikes van
Crash victims' identities mixed up
Whitney Cerak's Blog (this is from immediately following the accident to the time Whitney returned to school a few months later)
Do you remember hearing the story of the mistaken identity? How do you deal with grief?
Posted by Counselor Musings at 7:11 AM

Counselor Musings
I'm a Clinical Mental Health & Addictions Counselor interested in helping people increase health & wellness in their lives so they can reach their full potential and be flourishing in life. At the same time, I'm on my own journey of health and wellness.